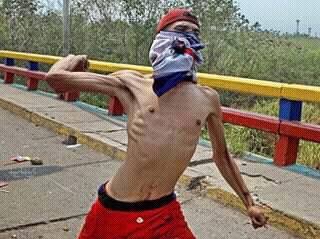 Two of the trucks that pushed through were burned as they attempted to cross the border. One of the drivers was killed. Young people tried to salvage what they could from the burning vehicles while others threw rocks under clouds of tear gas, attempting to protect their friends.

At the Colombian border, people of all ages and backgrounds led by Interim President Juan Guaidó and members of the National Assembly, attempted to cross the three bridges that connect both countries. They were met by fully armed Venezuelan National Guards and bands of militants empowered by the regime to attack civilians.

On the southern border with Brazil, the First Nation Pemon people were merciless attacked by Maduro’s forces. Local reports reveal more than 30 killed and scores injured. The aid did not get through at this point either.

Maduro showed his true colors, caring more about remaining in power than allowing desperately needed food and medicines. Finally, the whole world was able to see plainly what Venezuelans have endured during his 6 years of despotic rule.

In another significant development, the day after the border showdown, Mexican-American award winning journalist Jorge Ramos was granted an interview with Maduro. Ramos, well known for his incisive questions and polite but direct style, ended up detained as Maduro abruptly left the interview when confronted with a video that a Ramos had taken earlier. The video showed three men eating out of what they could salvage from a garbage collection truck. The journalist’s equipment was confiscated, including cell phones, and they were all kicked out of the country the next day. Jorge Ramos described his experience in a New York Times piece.

These three stories undeniably point to the larger story the people of Venezuela face. Maduro has usurped power through a fixed election. The Venezuelan Constitution makes provision for situations like this in articles 233, 333 and 350 stating that in such cases the President of the National Assembly must take charge as Interim President allowing for elections to take place within 6 months. This is the legal standing in which he has taken authority for himself.

The international community overwhelmingly responded positively to these developments in Venezuela, thus recognizing the Constitutional right for Juan Guiadó to be known as Interim President. Last January 23rd, immediately following the announcement from Caracas, United States President Trump was the first to affirm recognition for Guiadó. He was followed by the major Latin American nations and Canada, the European Union, Japan and others totaling more than 50 countries. China, Rusia, Turkey, Cuba, Bolivia and Nicaragua still support Maduro’s illegitimate claim to the presidency.

Since Saturday, a steady number of National Guardsmen, both officers and soldiers, have crossed the border into Colombia and have pledged their support for the Constitutional process while denouncing Maduro as a cruel “usurper” who must go.

At this point Guaidó intends to keep the moral and political mandate as he seeks a peaceful resolution for the situation.

Everyday people in Venezuela continue to face hunger and the threat of death as medicines are desperately needed.

A Decisive Weekend for Venezuela and The Americas

Making a Difference in Venezuela
Scroll to top