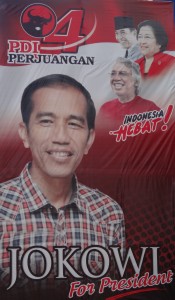 Joko “Jokowi” Widodo represents the ultimate “dark horse” of any presidential election. Last year he was repeatedly asked if he wanted to run for president but he always said, “my job is to serve Jakarta and that is all I think about every day.”

In the two years since Jokowi became Governor of Jakarta, his reputation for efficiency and care for the city and it’s people has broken all records for popularity. From his barefoot walks in the flooded streets and slums to his sponsoring of bike riding and street festivals in the most important avenues of the city, almost everyone is thrilled to have a leader that has broken the mold of local politicians and has made a palpable difference in the lives of all. From the poorest to the wealthiest, everyone has been impacted and the majority approve of his leadership.

Therefore, it was no surprise when Mrs. Sukarnoputri, leader of the PDI-P party and daughter of the
father of Indonesian democracy, asked Jokowi to be the party’s presidential candidate.

The impact has been felt all over the archipelago and Jokowi is poised to win the contest next July 9th.

Last night, I interviewed a couple of university students in Medan, 1,288 miles from Jakarta. They explained their preference for Jokowi by saying that he represents the future. The other candidates, they clarified,  represent the old way of politics but Jokowi surrounds himself with younger people who are eager to improve the lives of the 250 million inhabitants of this 4th most populous nation in the world. 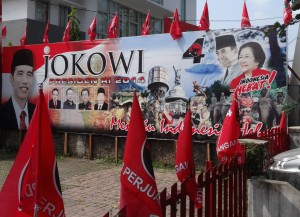 ne itself by itself. Instead of falling into the North-South or East-West definitions of the last century, this nation has sought to carve an identity of its own. With Jokowi as president, Indonesia has the potential to lead the world by caring for the poor first and thus caring for the well-being and health of the nation.