I have broken bread with Refugees in Guatemala, I have sat down in a tent in northern Macedonia with Kosovars, I have delighted in Pakistani food prepared for me with great love and sacrifice by friends who had little except the food they were sharing.

Refugees, are people who unwillingly and at great risk have left their familiar surroundings in order to find safer places in which to live. Usually, they come with little besides what they can carry on their hands.

Today, the UN reported that “There are now more than 45 million refugees and internally displaced people – the highest level in nearly 20 years. Last year alone, someone was forced to abandon their home every four seconds,” Secretary-General Ban Ki-moon said in his message for World Refugee Day, observed annually on 20 June.

The scandal of this all time high numbers does not begin to describe the pain and suffering that Refugees go through. 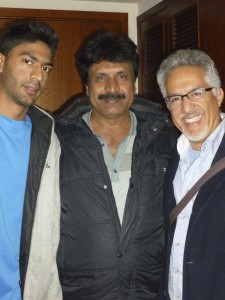 Amir, his Dad and family have now resettled in Houston, Texas

My wife and I, have opened our lives, our homes and our refrigerators to Refugees. In the process we have learned the details of the pain some of these folks have endured and often continue to endure even while living in the relative comfort of an apartment. Most of them face a minimum wait of 3 to 5 years and some up to 8 years for a third country that would give them asylum and permanent residency.

The story of Anser, a young Pakistani Ahmadi Muslim broke our hearts. He told us how his mother was killed when other Muslims who oppose their faith came to their homes and ransacked their place. Anser, was so broken that several years after the tragic events he could not talk with out breaking down to tears.

I could tell you many more such tragic stories…

I don’t see any simple solution to the problem of Refugees. But I know that there are people who with great courage and determination serve them. They often choose to give up the same things Refugees leave behind but they are compelled to go.

Their work is often hindered by all types of red tape and even opposition from the host governments. But they stick it out and bring hope and life to them.

The types of people needed are vast; from health care workers to peace mediators, from teachers to midwives and nurses, from community organizers to small business entrepreneurs.